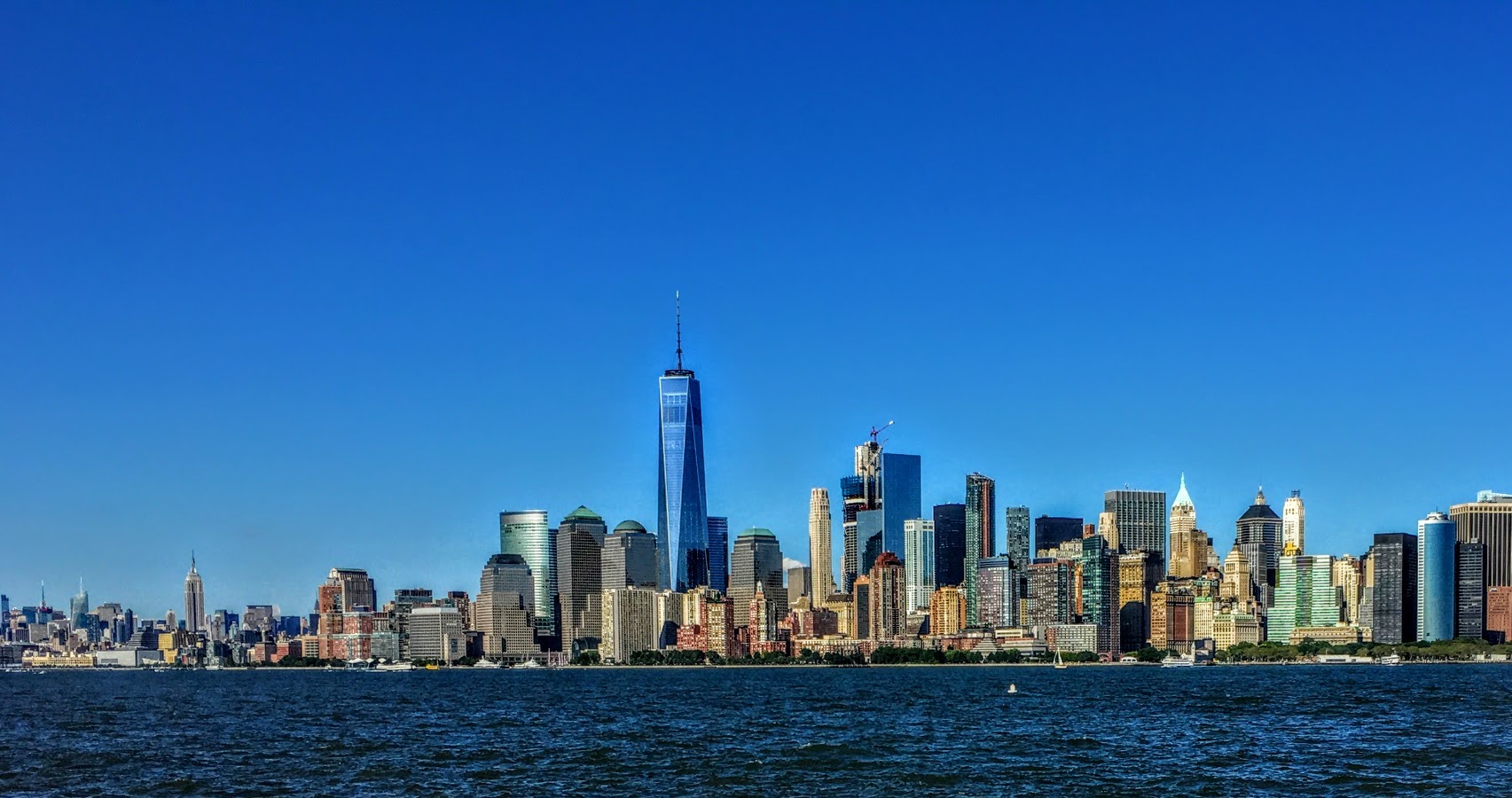 It was around 01:00 o’clock in the morning in New York, on the 1st of August, when we entered the “city that never sleeps” in the most drowsy condition.

We were on the road for a few days, from Chicago to Cleveland, to Niagara Falls. And a couple of hours spent on the Canadian border, by mistake, because we were too “tourists” to notice that we were heading to another country on the fastest route to Niagara. And to make things interesting, we didn’t have a Canadian Visa and were suspected for attempting to pass the border illegally.  So the inspection was as thorough as possible. But, no!… We weren’t subjected to a cavities search! 🙂

We were very impatient to get to our Airbnb apartment in Queens Astoria and rest. But the city thought we needed just one last excitement for the day. So as we arrived in the supposedly safe borough, only two blocks away from our place, we noticed a police car having its beacon lights on. After getting closer, we saw two guys lying down, facing the ground, and a police officer handcuffing one of them, while yelling at the other to stay put. We slowly passed them, with a half excited – half suspicious feeling, but all the while, dazzling at the incredible thing that we just witnessed…

I guess that was just New York’s unique way of welcoming us and we can only thank him for the originality. 🙂

The next morning we woke up fully re-charged and after a frugal breakfast on the railway platform, we stepped into the “N” line and headed straight to the heart of Manhattan.

And the excitement really started to kick in.

This greenery grandeur is for over a century now, the film set for many famous urban romances, like “Breakfast at Tiffany’s”, “Barefoot in the Park”, “When Harry met Sally”, “Great Expectations” and my favorite: “Annie Hall”. 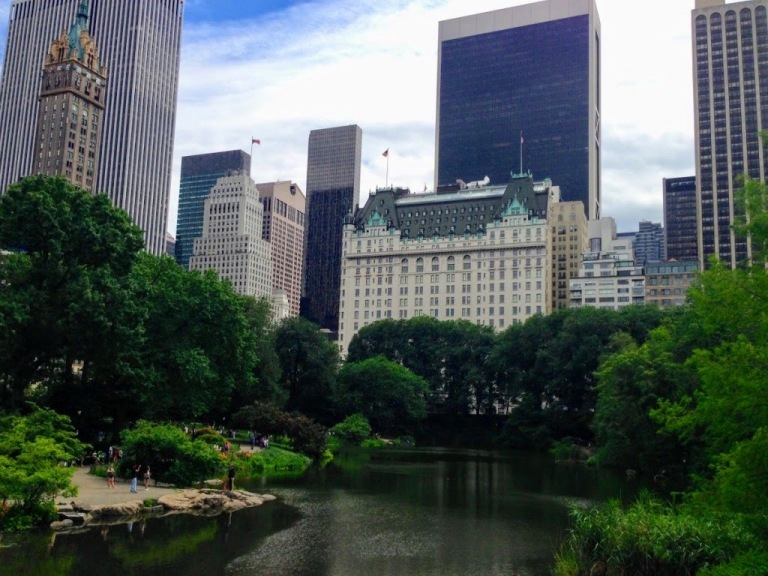 This was the first public park we set foot in that requires a map. And its grandness was a bit overwhelming when we realized that, although we split the park in a 2 days visit,  we didn’t even cover half of it.

But here is what we got to do, on fast forward:

Promenade on “The Mall and Literary Walk” – the most photographed alley in the park:

Got romantic on “Bow Bridge“:

Went through the maze of “The Ramble” and reached Belvedere Castle:

Walked barefoot in the park myself, in “Sheep Meadow“:

Times Square is close to Central Park, just 10 minutes along 7th Avenue. So we left the chilling and peaceful atmosphere of the park and very quickly replaced it with the stir found at the base of every skyscraper.

Getting closer and closer to Times Square meant bumping into more and more people. And at the last traffic light before arriving, we actually waited in a queue on the sidewalk in order to cross the street.

And once we got there, we saw the flashing Broadway billboards…. 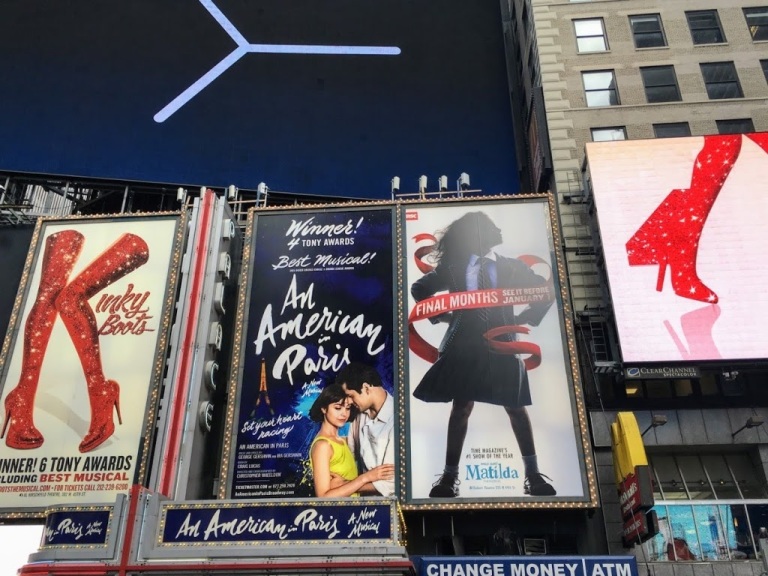 And even more people…

A walk along 5th Avenue led us to the most emblematic NYC building and a top-notch movie star among other concrete characters.

But being famous means (among others) two things:

So reaching out to such a celebrity wasn’t easy. In order to get to the top of this beautiful landmark, we had to wait in line for about 2 hours, pay quite a lot on the admission ticket (34$/pers – main deck or 54$/pers – top deck) and once we got up there, elbow in the crowds of “fans” to get some sight over the city.

Here are the all round views: 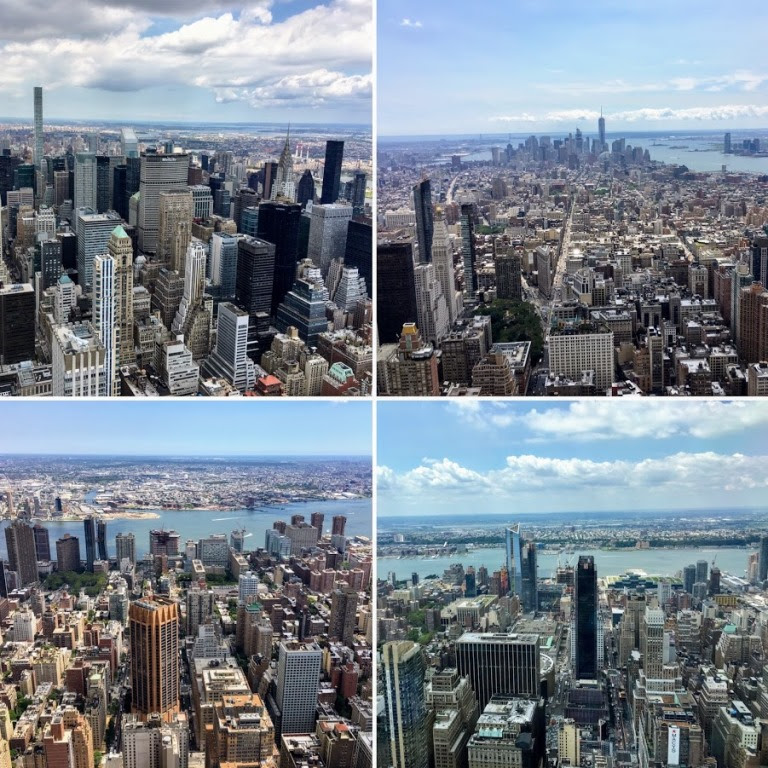 Top left: North view – Chrysler is the building with a spyke roof

Top right: South view – All the way in the back are the Lower Manhattan skyscrapers.

And considering how narrow and crowded the main observation deck was, we are amazed that no one photobombed us in this picture:  🙂 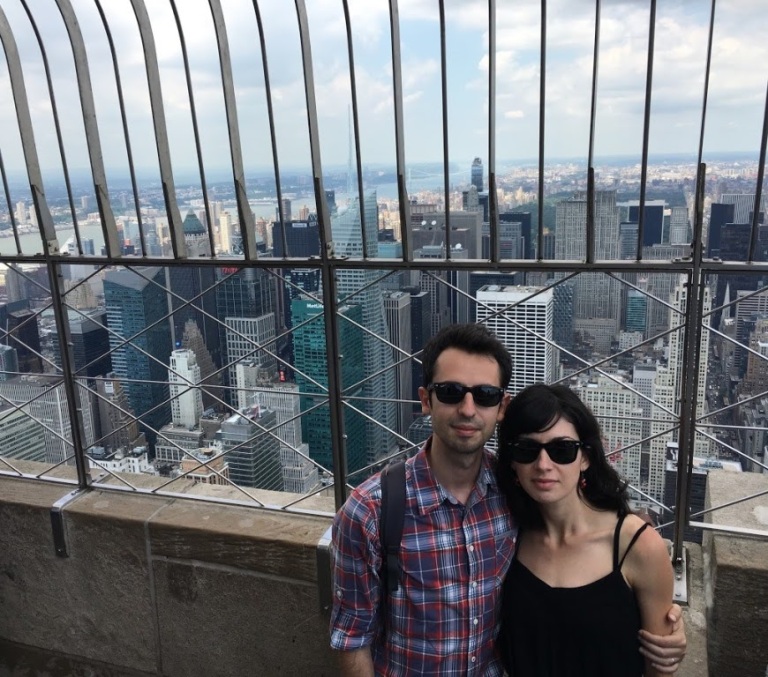 Statue of Liberty and Ellis Island

Getting to lady Liberty, on the other hand, was quite easy.

We went to Battery Park and bought a round trip boat tour on the Hudson River, to both Liberty & Ellis Island.

…then got super hyped on the other side of the boat glancing at the pretty lady waiting for us ahead:

Once we stepped out of the ferry and onto the small piece of land where the statue lies, we got free audio guides and started the tour around the statue.

We didn’t climb the crown, as that requires reservation much in advance, but the view over the skyline was just perfect at the feet of the statue as well.

Next, we boarded the ferry once again for Ellis Island. 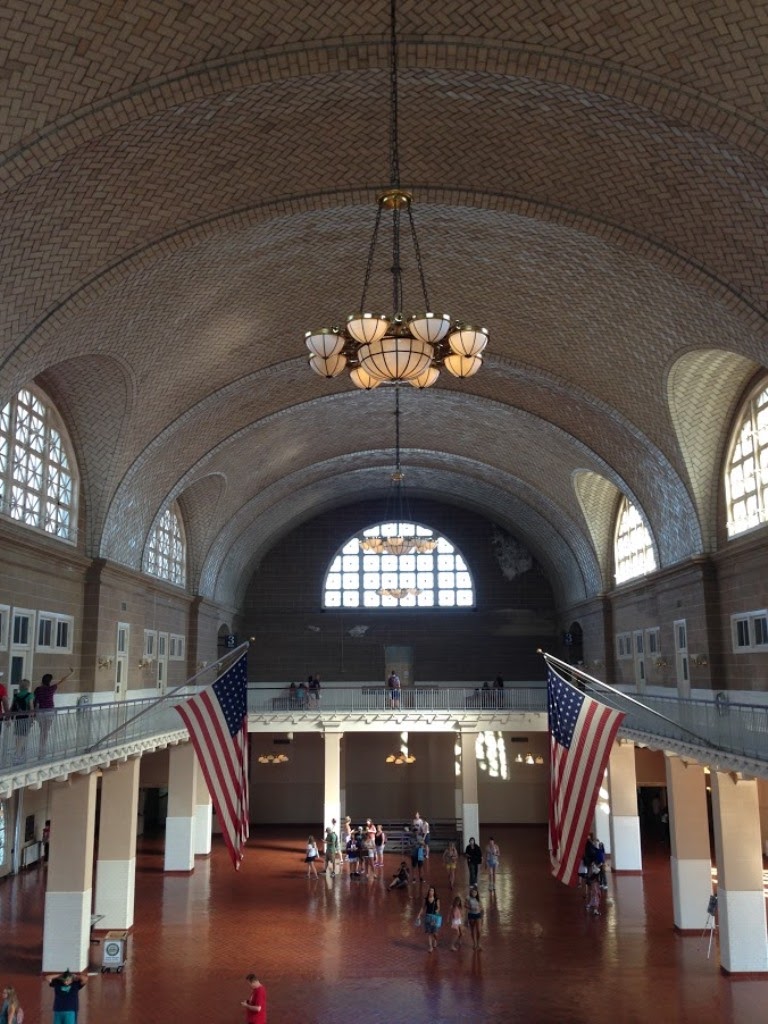 This place was the busiest immigrant inspection station in the USA (i.e. the place Titanic was also heading to, bringing immigrants from Europe), and now hosts the museum of immigration.

Free audio guides are also available here, so we picked them up and started the tour.

With a very well done narrative that immediately transported us to the highest immigration era of the country, the museum made us partakers of the entire inspection process, from the voyager’s first steps onto the “land of opportunity”, until he/she was declared fit to work. A very long queue separated the immigrant from pursuing his American dream, along with a series of inspections (papers, luggage, medical and interrogatory) that sometimes could last even weeks.

But this was not a stopper for the dreamers rushing to this new world, hoping their lives would be richer, happier and fuller.

Back in Manhattan at nightfall, we started touring the city by foot.

We stepped into the financial district and caught The Charging Bull by its horns, or by its… 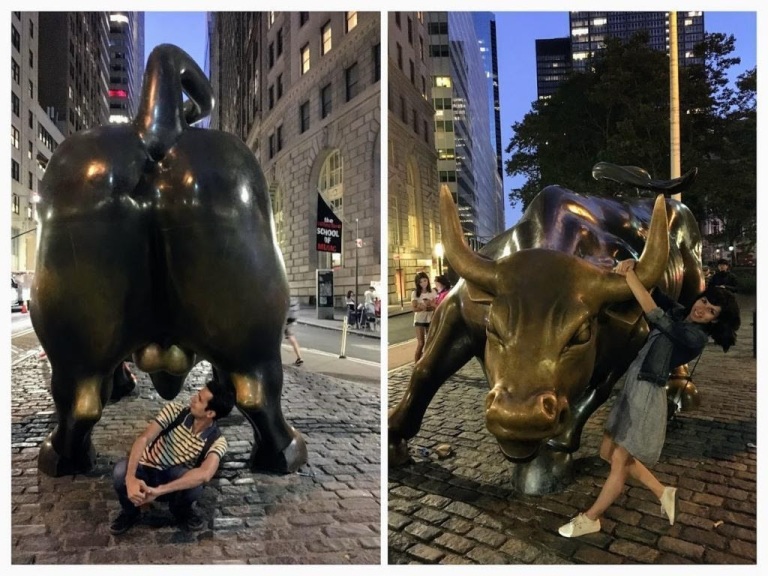 Moved ahead on Broadway, turned right at City Hall Park and started our promenade on the magnificent Brooklyn Bridge: 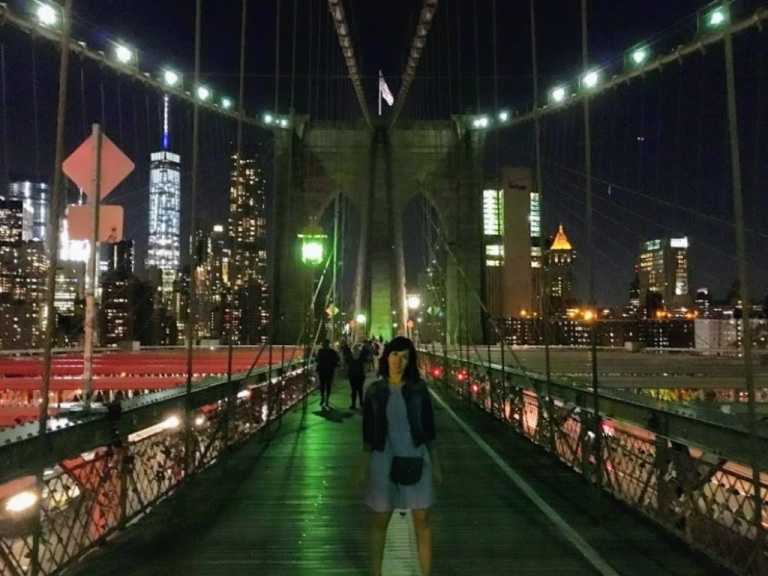 Another night, in midtown, we walked on 5th Avenue: 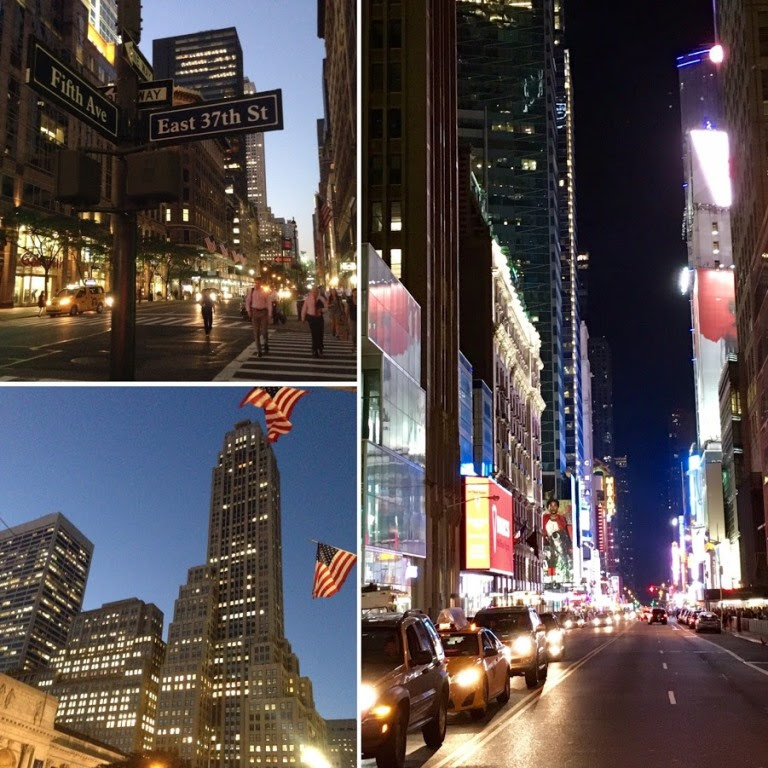 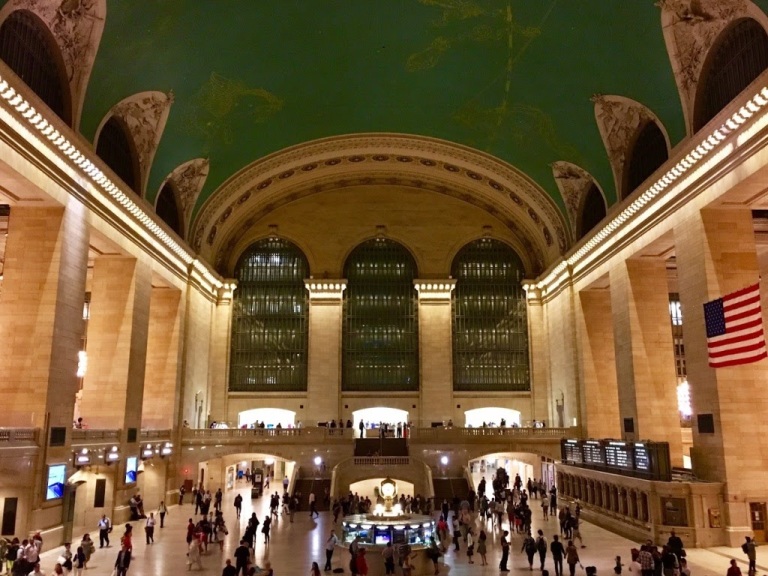 Then on to the Rockefeller Center:

Climbed the Top of the Rock observatory and had a sight over the midtown lights:

What I enjoy the most when visiting cities is to walk aimlessly through their neighborhoods and try to get their “mood”. At this degree, New York was like no other… he has moods for every taste and I haven’t even seen them all! 🙂

Sirens, car engines, buzzers, traffic, people per square mile, hot-dog stands, skyscrapers … this area is having the most of them!

That “busy city” sound we often hear in movies is probably coming from here. 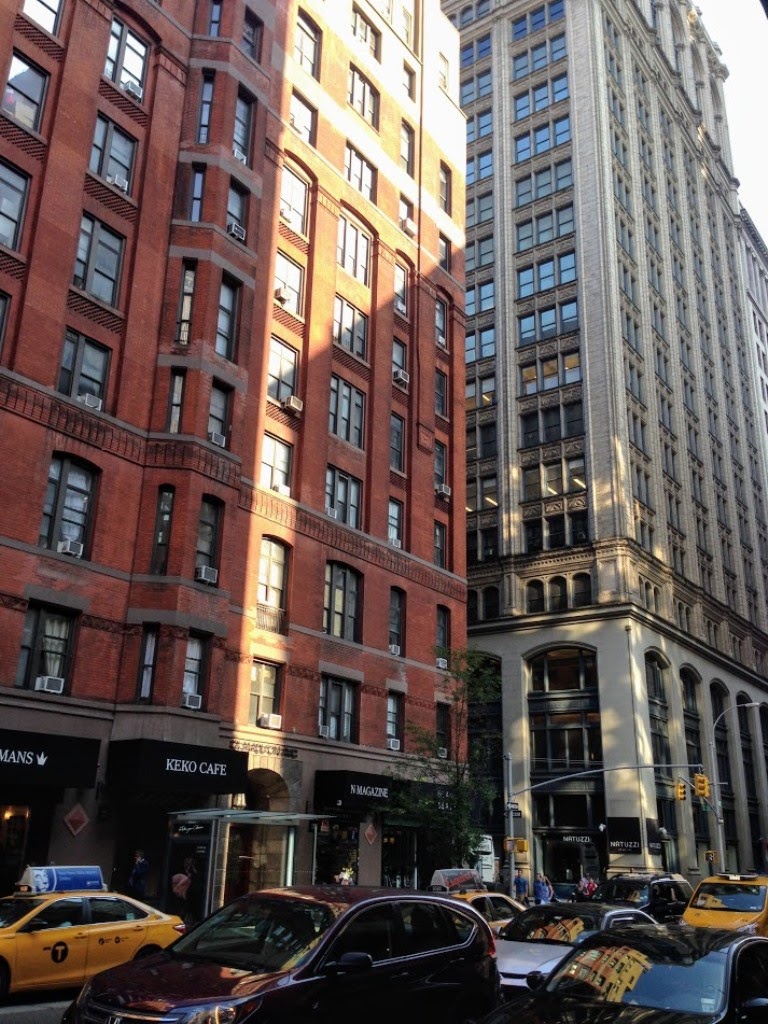 But aside from the noise and the crowds, midtown holds some of the most iconic buildings raised in the great skyscraper race of the early 20th century. These are Art Deco style beauties like the Empire State Building, Chrysler or the Rockefeller center: 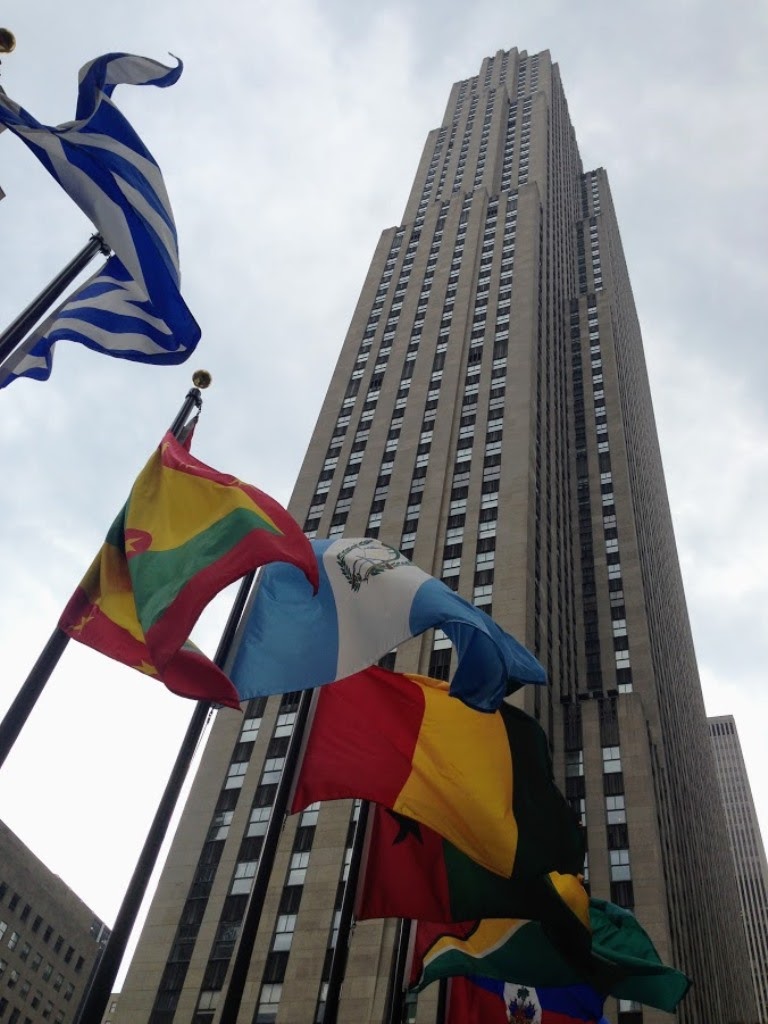 Another honorable mention, although not a skyscraper, but a very “good looking” building is the Flatiron: 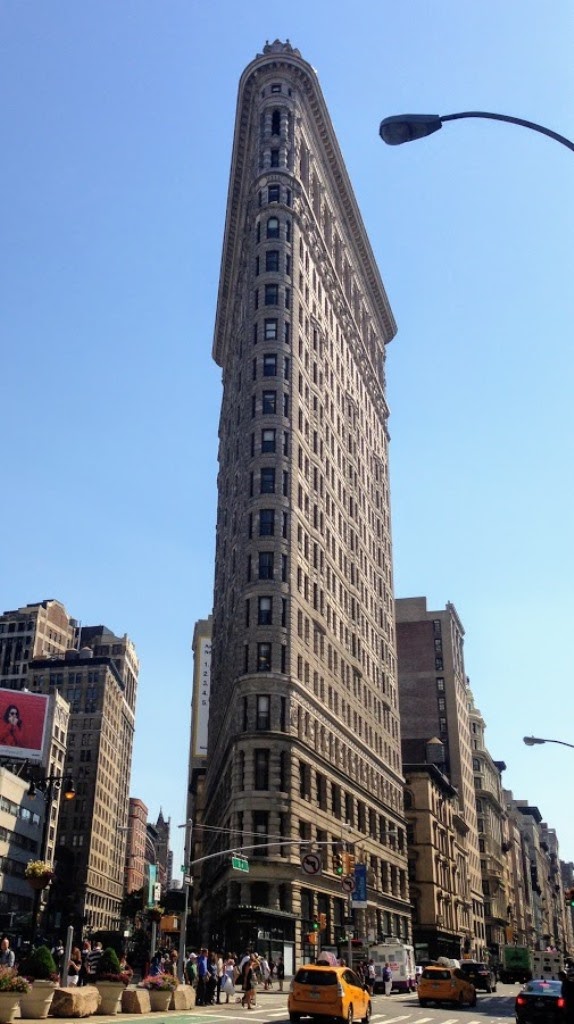 This financial area is home to Wall Street and is also filled with skyscrapers.  In fact, it prides with holding the tallest building in the Western Hemisphere: One World Trade Center

At the base of this high-rise is the World Trade Center Memorial. The memorial comprises two reflecting pools that sit within the footprints of the Twin Towers: 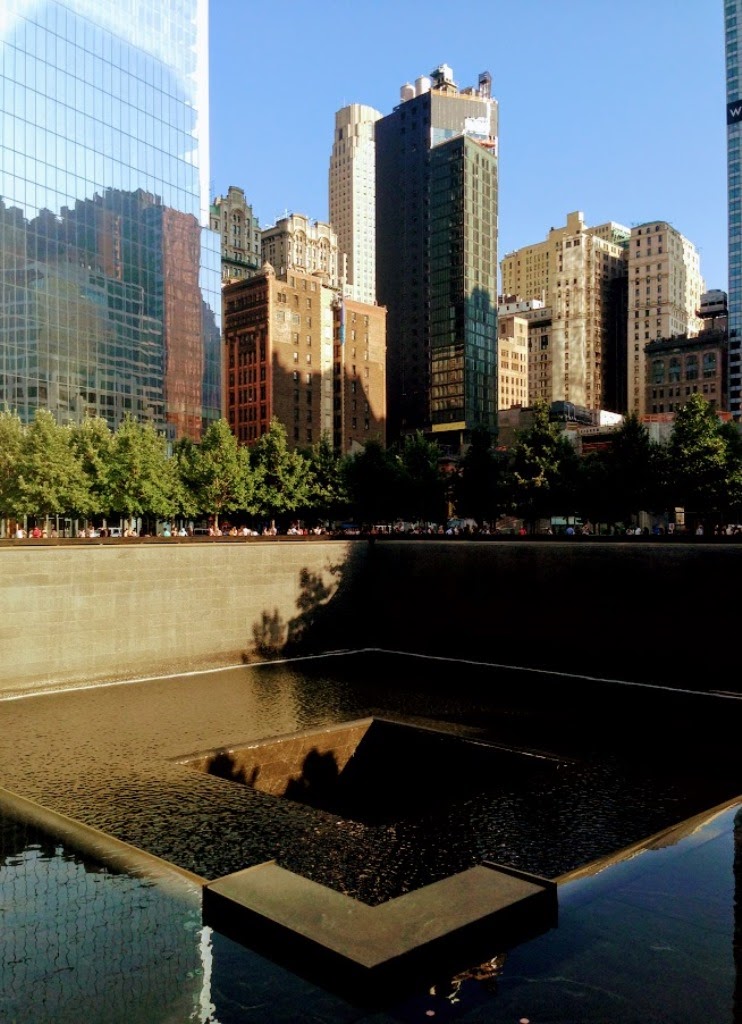 The names of every person who died in the 9/11 attacks are engraved into the bronze panels, bordering the pools. And yearly, each memorial name receives a white rose, from the memorial staff, to commemorate the person’s birthday.

This is a daily task for the staff because there are tens of birthdays for each day of the year.

Switching the gear from corporate areas to residential ones, this well-known neighborhood is located east from Central Park.

Movies like “Sex and the City” and “Gossip Girl” set their main characters in this neighborhood precisely to emphasize their traits.  They were affluent socialites who afforded living in a central, neat and spacious neighborhood.

And this is exactly the vibe we received from Upper East Side: aristocratic and sophisticated, displaying its airs with wrought iron gates, architectural details and pot plants strategically placed:

And, of course, fancy stores:

As tourists, we tried our luck at “Serendipity”. But spontaneity is not appreciated here. 🙂 So finding all the seats reserved until the next day including, left us with no other choice but to settle for a picture:

Changing the set to a European style, we are now in Little Italy, the place that made us feel like we could meet Tommy Angelo or Don Vito Corleone at every corner.

For a fan of “Mafia” and “The Godfather”, it was very easy to discount the modern details and imagine vintage cars and gangsters passing by:

But in addition to the old “La Familia” feeling, Little Italy is about sidewalk restaurants and good food: 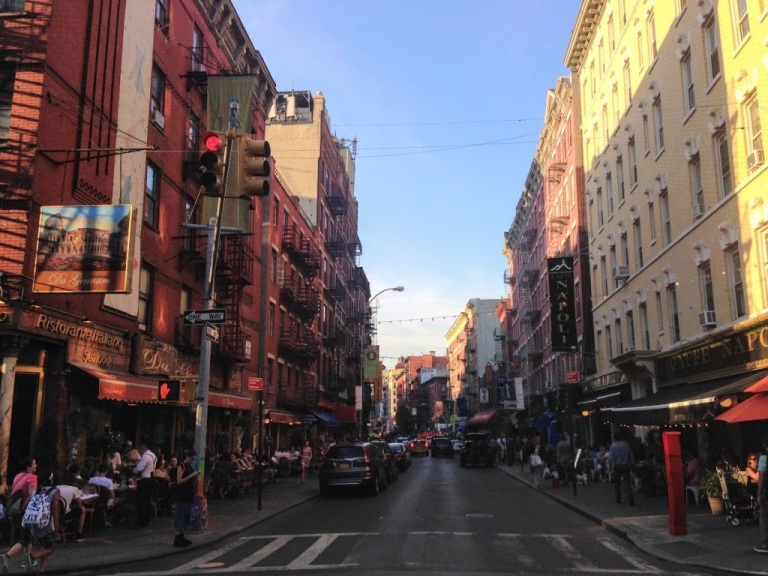 And I was not at all surprised to find a restaurant with my name on it 🙂 (“mela” in Italian means “apple”):

We didn’t have much time to explore this larger neighborhood, because we were on a hunt for souvenirs. But luckily, Chinatown is filled with souvenir shops.

We discovered this neighborhood almost by accident and probably this added more to its value, but the fact is that this is our favorite!

And the reason for liking it so much is because it perfectly balances the residential part, similar to Upper East side: 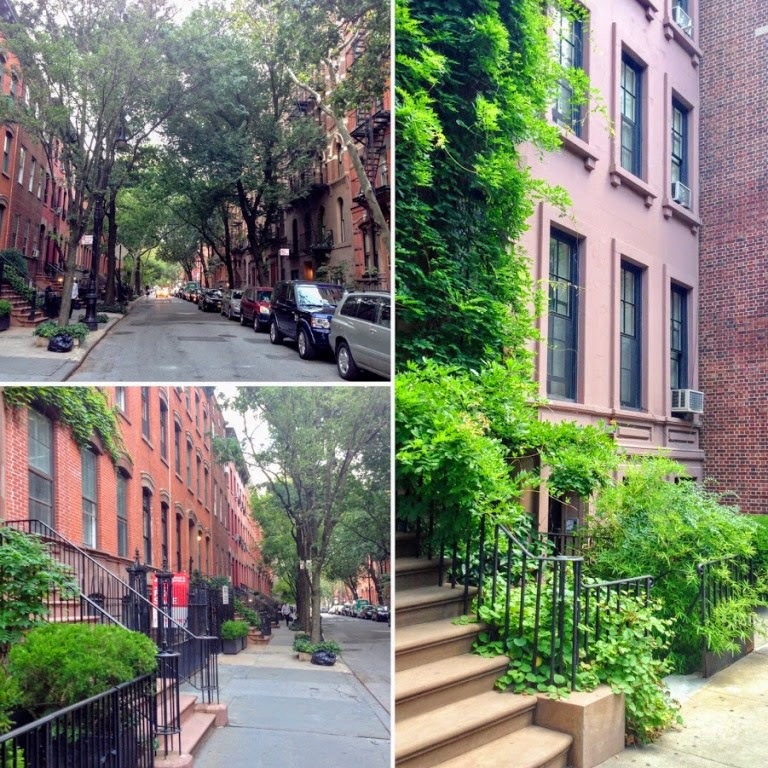 With the fun part, hosting lots of bars and restaurants of different kinds: 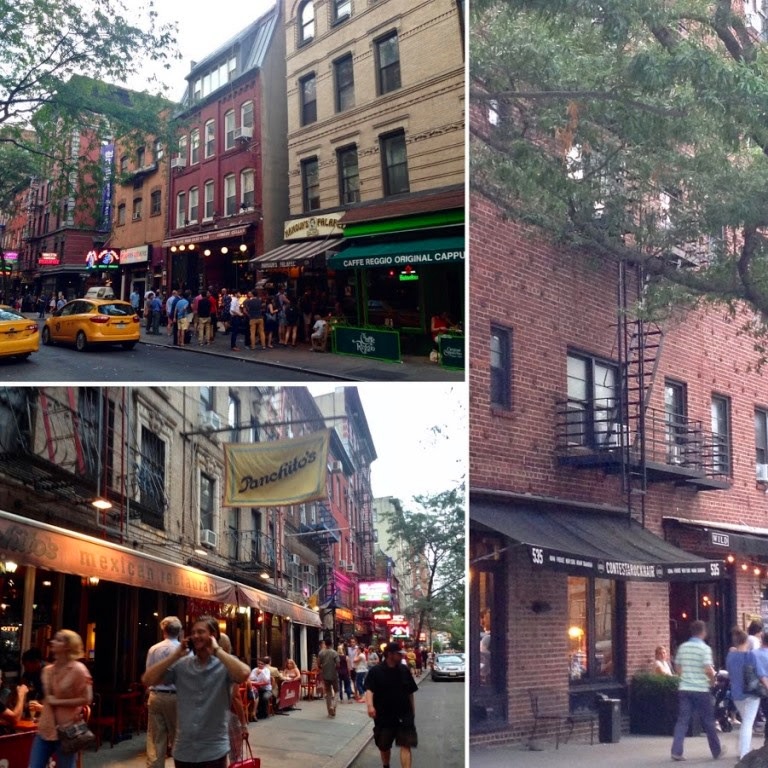 Here and there we’ve also seen an eccentric part:

But overall, it creates a young, loose and bohemian atmosphere that we enjoyed very much.

Later we’ve learned that this has been known as an artistic haven in the 60s. Which can only explain the load of vinyl record stores and stand-up comedy bars, one of them being the famous “Comedy Cellar”, where there’s a big chance of running into comedy veterans like Jerry Seinfeld or Louis CK, who are making random visits to their origin place: 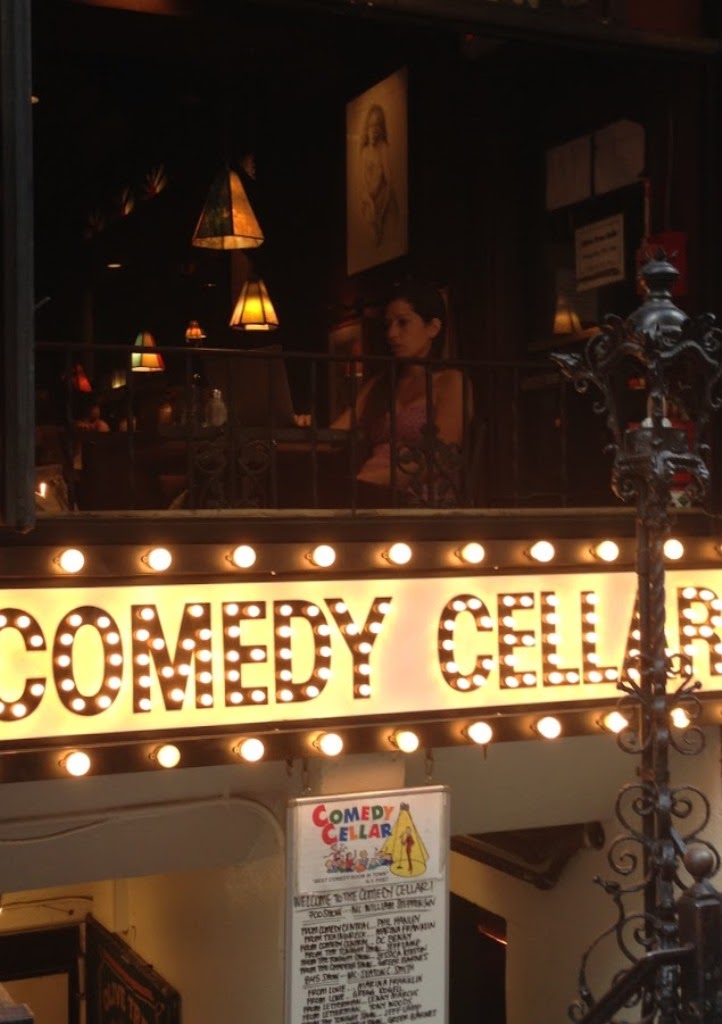 Another important detail we liked in the neighborhood’s scenery, are the typical NYC fire escape stairs:

Other things we did ‘till our time ran up 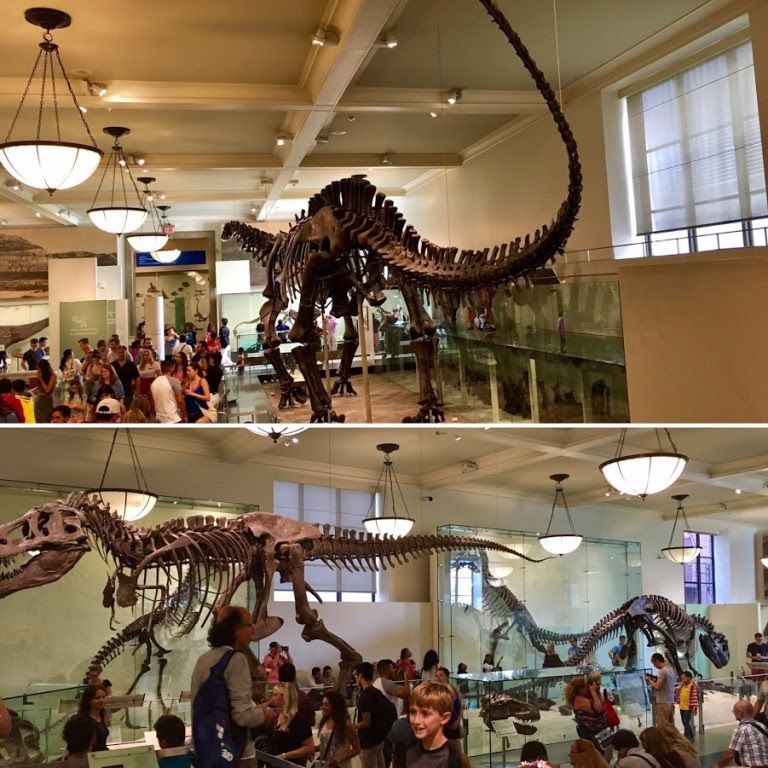 That’s it… even though there were still so much more to do on our list!

We were wrong to think that we can fit New York into our agenda. Because all along, it felt like New York fitted us into “his”.

*Plus, there a lot more space on the observation deck at Top of the Rock, than at Empire’s.