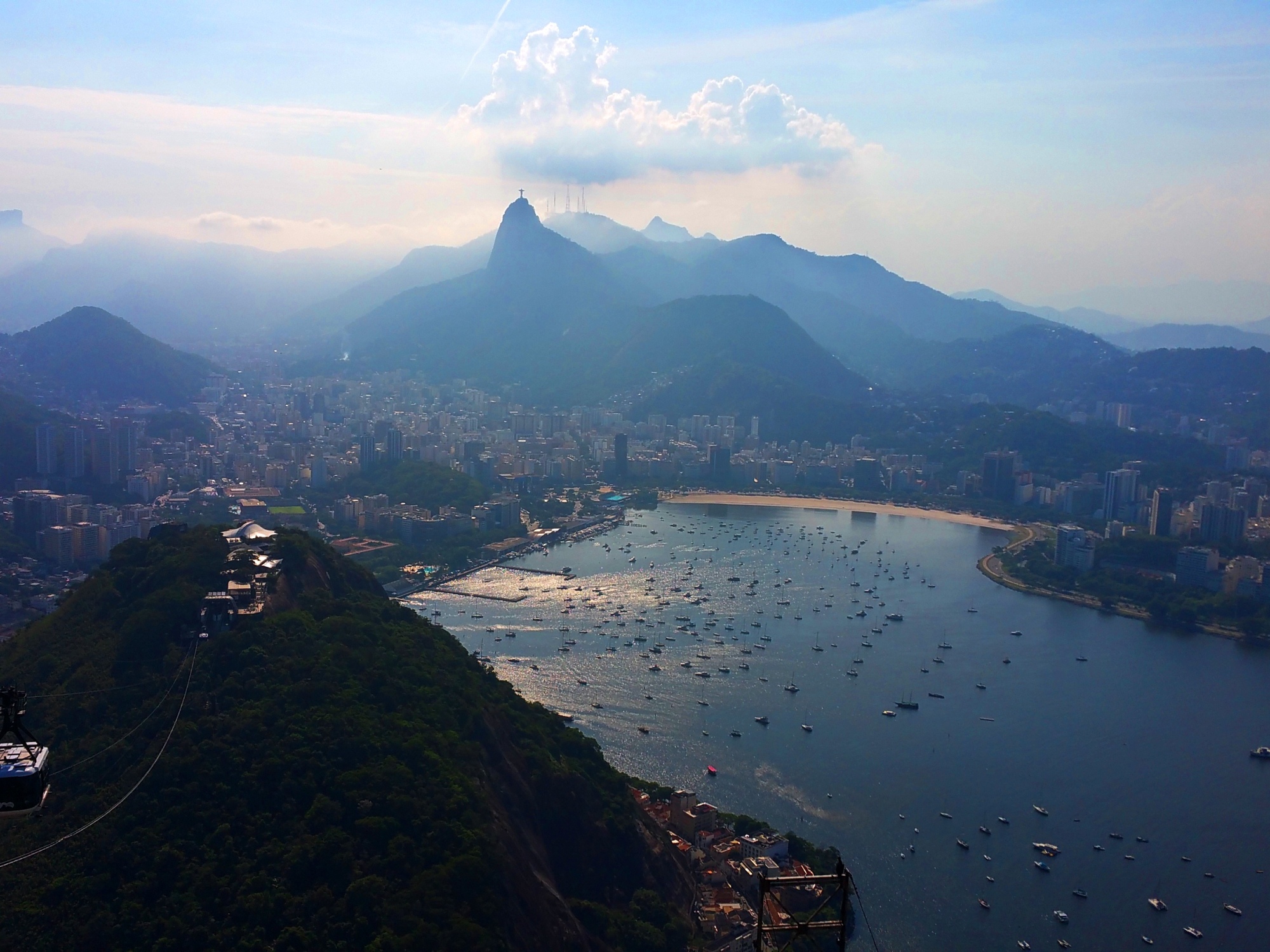 Going on holiday in Rio de Janeiro is a scary idea. One of the most visited cities in South America, with a population of 7 million people and more than 12 million in the metropolitan area, Rio is pulsating under samba rythms, lush vegetation and hot temperatures. Add the fact that its huge statue of Christ the Redeemer on Corcovado Mountain is named one of the New Seven Wonders of the World, and you’ll get a first impression of how touristic Rio has become.

Luckily, we’ve come up with a step-by-step guide to get around this megalopolis. We hope our tips will make your travel safer and easier in Rio de Janeiro!

We land in Rio after a 10-hours flight. We can feel from the airport the irritating heat. It’s like someone pushes us into a tropical greenhouse and runs away with the key. There is no turning back now.

We have the heaviest clothes on us: boots and trekking pants, polar, waterproof jacket. What can I say? It’s January and we’re coming from Europe. Besides, not even a needle fits into our carry-on 8 kg backpacks. We have one-way tickets and a map with our itinerary crossing South America: from Brazil on the East, Argentina and Chile on the West, all the way to Bolivia and Peru in the North. Oh, and a lot of enthusiasm.

Ok, let’s buy a SIM card. We barely find one at a sky-high price, but in 10 minutes we have both our phones blocked. Who would have thought of decoding them before? Not us, that’s for sure.

With the tail between the legs we get out of the airport and try the taxi lottery. The driver is an elderly man who only knows Portuguese and talks a lot. We can only pick up a few words, but we get the idea. It’s already dark outside, and the peaks of the mountains surrounding Rio are lit like a Christmas tree. Houses are crammed to the top of the hills. At their base a party is just getting started, with hundreds of people descending from the “favelas” and invading the streets, while dancing. “Do not go out there during the night. Actually … do not go there at all! ” says our taxi driver in Portuguese. “Muito perigoso!” I nodd that I understand what sounds like “very dangerous”.

The fear of the first taxi ride is gone. The old man is really nice. Knowing that we have 40 minutes left until we get to the hotel, I close my eyes. After a year of planning, everything seems more tangible than ever. Enough with research and calculations. We’ve crossed the ocean, set foot on the continent, it’s all happening right now. Let’s see how we survive Rio de Janeiro. 🙂

The accomodation with Rio de Janeiro’s climate is harder than I thought. Clothes are wet from the first minute we get out of the hotel. On top of that, we feel that everywhere we go, we’re being ‘scanned’ of any valuable belonging. The street has its own rules, and we need to adapt quickly.

We realize that it’s best not to walk alone too much, so we join some free walking tours around the city. The stories we hear from other travelers make my heart stop from time to time. Two 21-year-olds from Austria are already on the road for two months. They come from the Bolivian jungle and their skin is covered by mosquito bites. One was threatened with a gun in Colombia. Still, they seem to be living the adventure of their lives. Is that how we’ll be in a few months from now? 🙂

As if we have not suffered enough shocks for the first day, Geo crushes his foot on a concrete wall. Back to the hotel, we make ice every 10 minutes in the tiny freezer. This requires a strategy change: take it easy and go to one place per day. Lucky us, the color of the swollen fingers changes as the days pass: black – purple – green – yellow. Some hell of a start. 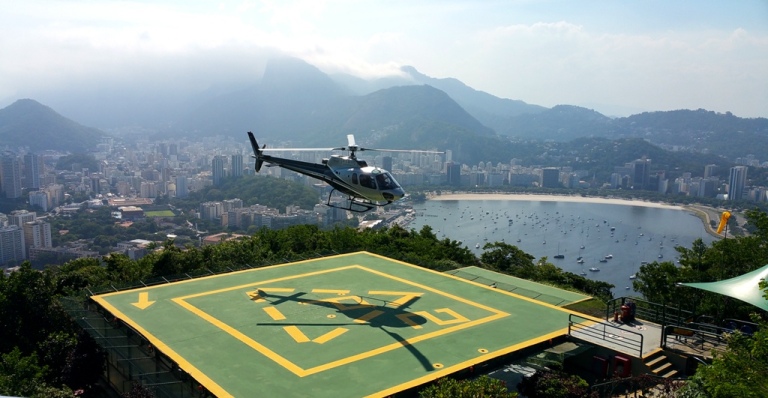 Here is what we recommend during your time in Rio de Janeiro:

We strongly advise you to take one of the free walking tours for the downtown and favela areas. It’s safer to be with a local guide who knows the city. Besides, you’ll learn a lot of things about the history of Rio and have fun along the way. 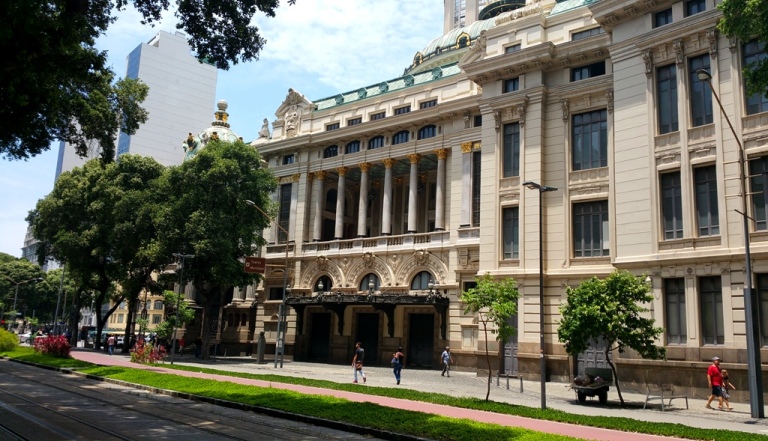 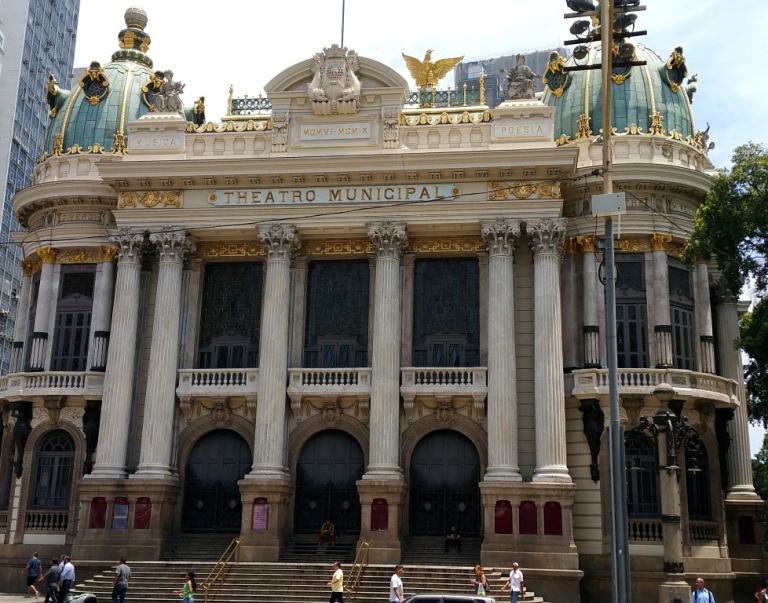 Known as the heart of Rio de Janeiro, Lagoa Rodrigo de Freitas (more commonly shortened to “Lagoa”) is a natural lake in the south of the city that is renowned for its tranquility. It’s surrounded with a cycle path, trees and framed by a mountainous skyline. After a day spent walking in the scorching sun, there is nothing more beautiful than watching the sunset here. 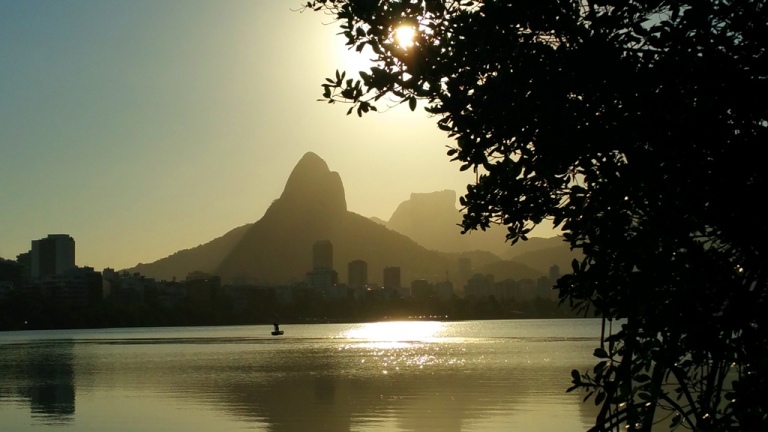 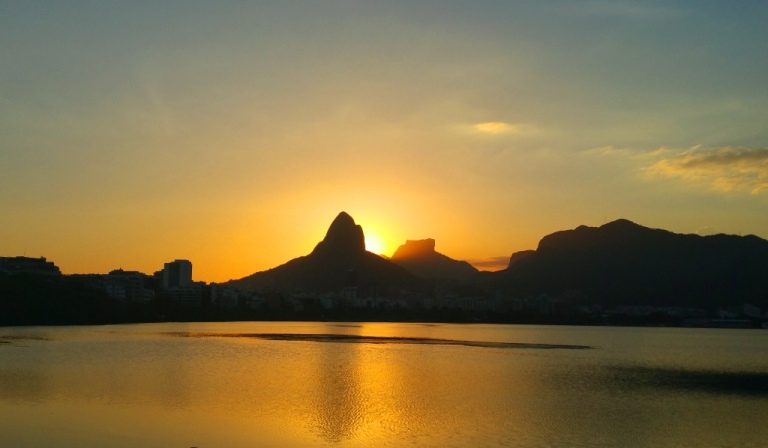 Up on Sugarloaf we feel completely safe for the first time in Rio. The high price of the cableway connecting Praia Vermelha to the Sugarloaf Mountain, makes it a ‘no no’ place for the pottential thieves. We find out that the local name (Pão de Açúcar) comes from the pieces of sugar kept in containers along the journey of the Portuguese ships. When unloaded, they had the shape of the container upside down, similar to a mountain.

Contemplating the city from above, makes us realize its immensity. The dense jungle covers everything up to the top of the mountain. It’s like looking at Jurassic World. 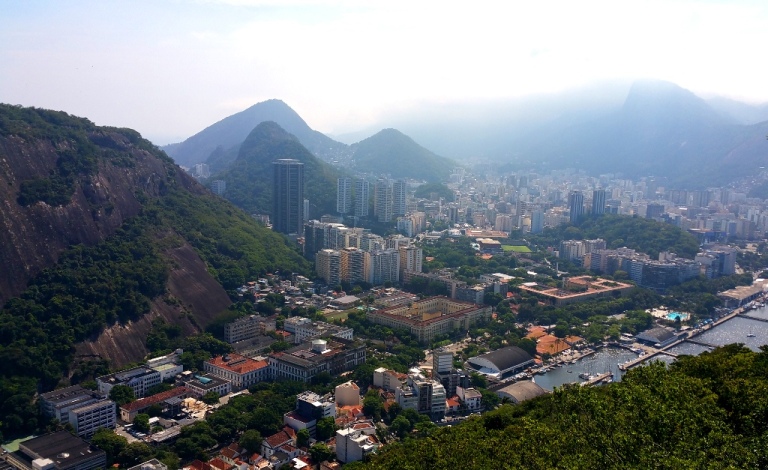 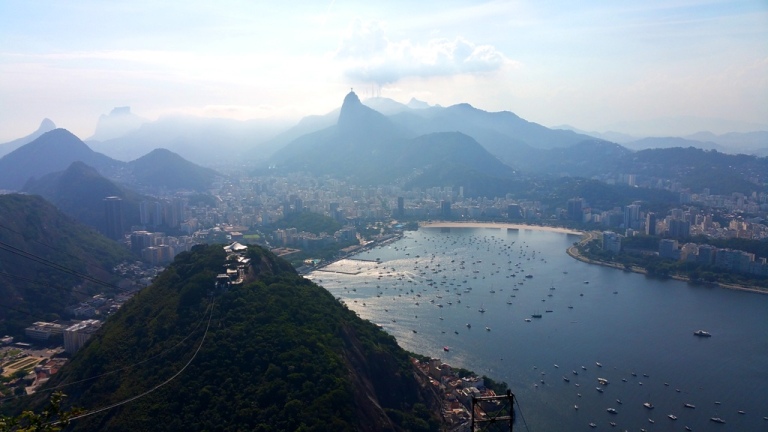 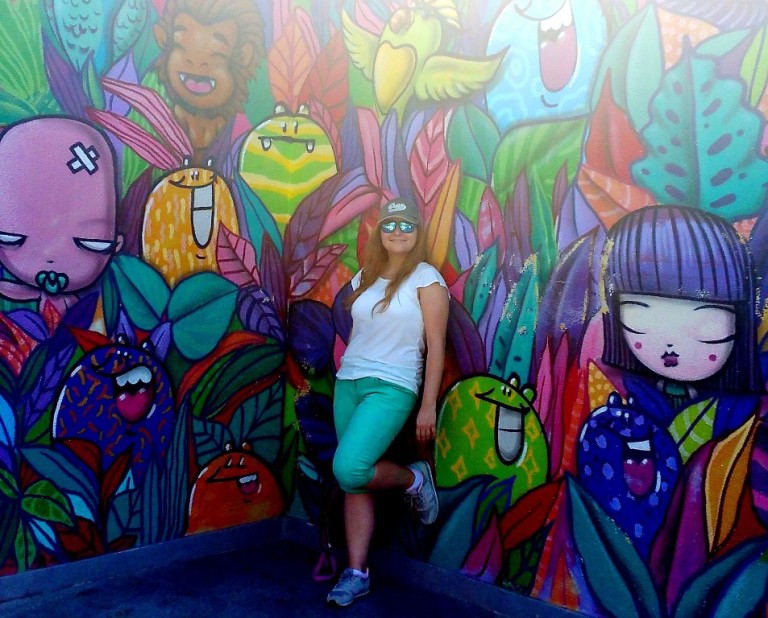 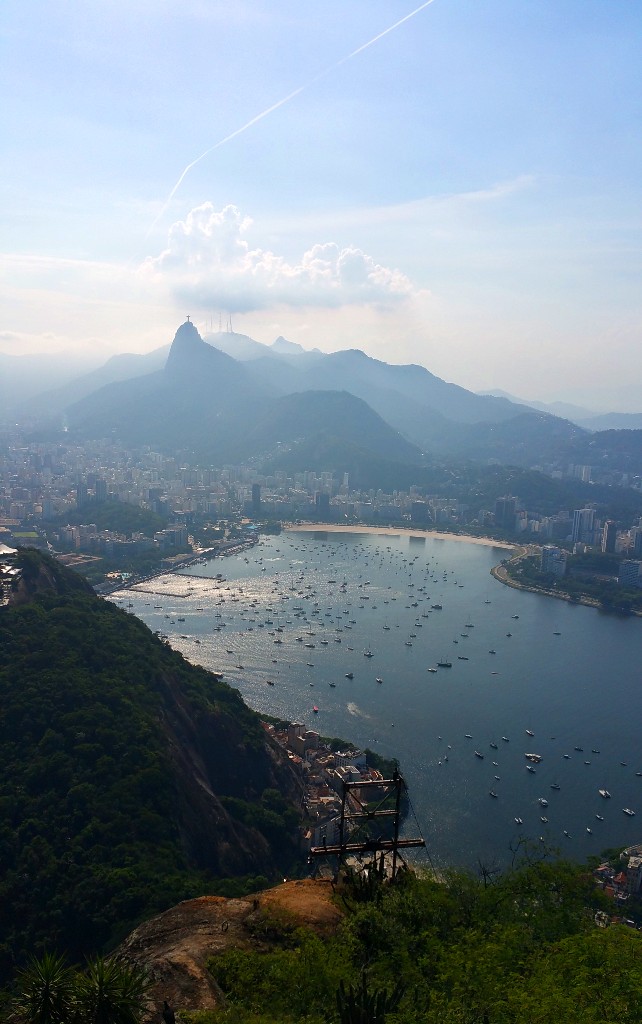 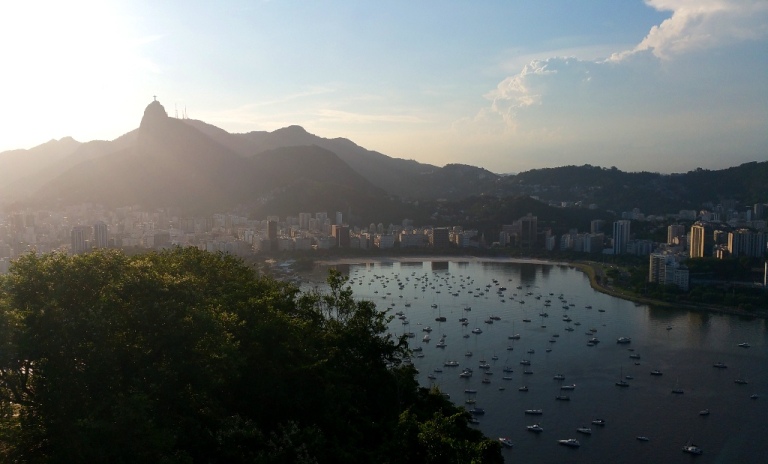 The big day has come. We will see the statue declared one of the new Wonders of the modern World. The injured foot is still in recovery, so we’re thrilled to find out that one of the touristic vans leaves from Largo do Machado to the statue. Right next to our hotel.

Up on the plateau, we rush in together with thousands of tourists. I have rarely seen such struggle: kneeling, climbing on the railings, sitting on the back on strategically placed mattresses. The degree of contortion reaches madness, all that to take one picture. The statue is really impressive, but we leave quickly before being swallowed by the crowds. 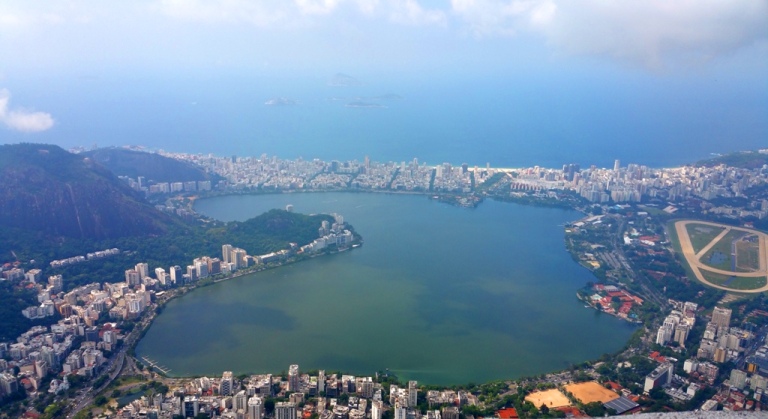 On the last day it’s time to laze on the shores of the famous beaches in Rio. 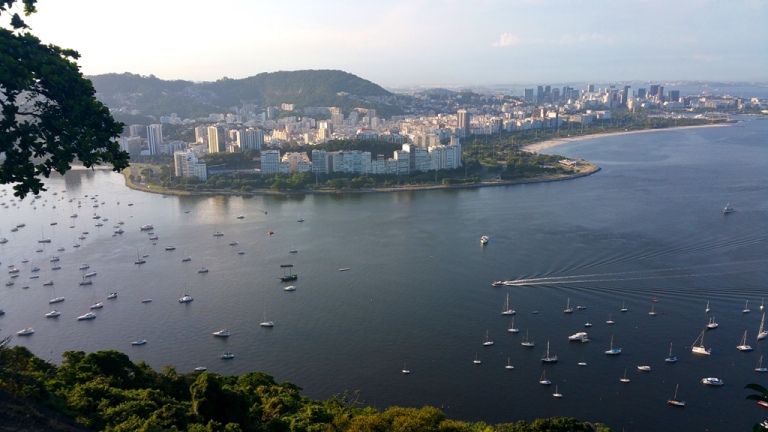 The sun is a killer, but I remember the rough winter we left at home, and I feel no regrets. We walk the Ipanema Montenegro street, crossing a legendary place: Garota De Ipanema (Girl From Ipanema), apparently the second most recorded pop song in history, after “Yesterday” by The Beatles, was born right here. The song was inspired by Heloísa Paes Pinto, a seventeen-year-old girl living on Montenegro Street in Ipanema. Daily, she would stroll past the Veloso bar-café and make an impression on the composer.

The evening finds us drinking caipirinhas by the beach. Under the pleasant spell of the Brazilian liqueur, all our fears wash away.

Tomorrow there’s another adventure waiting for us, at the Iguazu falls. Goodbye, Rio!

The name ‘Rio de Janeiro’ means ‘Stream of January’ in Portuguese, and was given to the city by the captaincy of the Portuguese Empire in the year 1565.

The colonizers  are named “carioca” (=the house of white people). In the late 17th century, Brazilian explorers began to find gold in the mountain streams to the north of Rio de Janeiro. Word of the discovery of gold filtered back slowly to the coast and to Lisbon. By 1700 the western world’s first great gold rush had begun. Thousands of colonists and slaves poured into the rugged mountains north of Rio de Janeiro.

There are 1.4 million people living in 763 favelas (slums) in Rio. Following the end of slavery and increased urbanization into Latin America cities, a lot of people from the Brazilian countryside moved to Rio. These new migrants sought work in the city but with little to no money, they could not afford urban housing, so went to favelas.

Rio has more than 50 kilometers of white and brilliant sand shorelines.

Brazil’s famous dance of samba has its roots from the African slaves that worked in the ranches in the State of Rio de Janeiro. There are more than 200 samba schools in Rio.

So, the main question: is it safe to travel to Rio de Janeiro? If you keep a low profile and stay in the safe areas, you will probably be ok. Nothing happened to us during a week. However, if you are approached by thieves, do not struggle and give them whatever is asked from you.

When to visit Rio de Janeiro

The average annual temperature is between 21 and 27 degrees Celsius. Rio de Janeiro is hot for most of the year, but weather is warm and sunny enough between December and March. If prices are high and you have trouble finding accomodation, the date is probably close to the Carnival date, which is in February or early March.

Where to stay in Rio de Janeiro

Do not miss the free walking tours.

Unlike most of South America, where Spanish is spoken, the official language of Brazil is Portuguese. At the hotel and touristic places the staff also speaks English. Before you leave for Rio de Janeiro it might be a good idea to learn a few words like:

In January 2018 we booked one-way tickets, took our backpacks and left cozy old Europe, for (hopefully) the greatest adventure of our lives: South America. If you like our story, don’t forget to spread the word!

South America in 2.5 months – all you have to know to do it yourself

Daily reminder
Hello summer 🌴
The sun will shine again
Wrapping it up with the most special experience of 2022, hiking in the Dolomites ❤️